Faking Photos at the National Archives

On January 18, 2020 The National Archives and Records Center issued a press release apologizing for displaying a photo of protesters at the 2017 Women’s March that obscured references critical to President Trump. The apology explained the image wasn’t actually an archival record, but one it licensed “to use as a promotional graphic.”

Okay now…. The Archives did something wrong. It acknowledged the mistake. It is taking action to assure this kind of thing won’t happen again.

Is that enough? Should we now feel reassured?

Well, not me. The faked image, as well as the National Archives’ statement, raises serious questions about integrity, falsification, and the Archives’ singular mission.

Why did the National Archives pay for an altered licensed image when it has access to so many authentic free ones? Did someone at the Archives order the fake image, or was the faking done without the Archives notice—then put on display without someone catching the mistake? Why did it take a news source—in this case the Washington Post —to call out the error before the Archive took action? 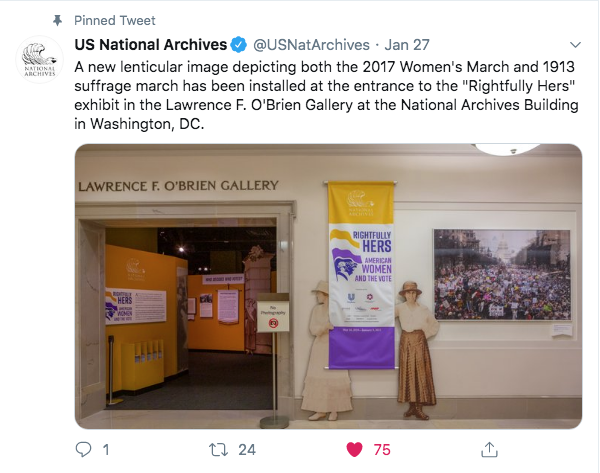 Is this incident a sign of a larger sinister plot to corrupt history so it leans into a trumped up truth? Or is the display of the faked photo simply the work of simpletons who aren’t minding the store?

I can’t answer these questions, but I know they matter.

As the former director of a history museum, I know how many times the text, images, and designs are vetted before an exhibit opens its doors. I’m not convinced that this Women’s March photo altered to wipe out its core intention – to protest against President Trump—could be anything less than intentional.

And, as the chair of the PA Historical and Museum Commission, I know how important it is to preserve the integrity of the historical record.

When a photo, a document or any other type of authentic record enters a government archives, it becomes a piece of history.  Any alteration corrodes the past forever. Fakes burrow deep into the psyche of the national consciousness. They call into question the veracity of every one of the billions of other documents. They raise the threat that tomorrow’s researchers will write tainted history, and that anyone who reads that history­—our children and their children and all future children—will be kept from the truth. They undermine the National Archives’ mission:

That’s why this incident is so serious, but that’s not the only reason. To me, there is a scarier prospect: that this small matter is much larger and more insidious. That it is a harbinger of things to come.

Totalitarian societies alter and remove documents and hold the truth hostage. Not democratic societies. Not the United States, the most democratic of all.

Nancy Moses is Chair of the Pennsylvania Historical and Museum Commission and author of Fakes, Forgeries, and Frauds.